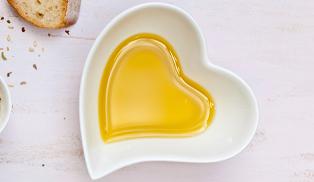 Oleate – the fat found in the golden liquid – could help a diseased heart pump blood more effectively and use body fat as fuel, researchers at the University of Illinois have found.

The most common reason a person may suffer from heart failure is when the muscle becomes damaged, including after a heart attack, through drug or alcohol abuse, and high blood pressure.

Shortness of breath, both during activity or rest; swelling of the feet, ankles, stomach and lower back; and fatigue are all symptoms of heart failure.

Currently, there is no way to reverse heart disease, and a combination of medication and lifestyle changes help patients manage their symptoms and keep their condition stable.

Scientists made their findings based on previous studies which show that a healthy heart absorbs fat to keep pumping, but if damaged the muscle can no longer process or store far – starving it of energy.

This means the heart is unable to work hard enough, and toxic fat deposits are left to clog up arteries.

Scientists believe that oleate helps the body produce enzymes which break down fat so the heart is once again able to absorb it.
“These genes are often suppressed in failing hearts,” Douglas Lewandowski of the University of Illinois in Chicago told the Telegraph.

“So the fact that we can restore beneficial gene expression, as well as more balanced fat metabolism, plus reduce toxic fat, just by supplying hearts with oleate is a very exciting finding.

“This gives more proof to the idea that consuming healthy fats can have a significantly positive effect on cardiac health.”

To make their findings published in the journal ‘Circulation’, researchers analysed how rats hearts responded to oleate or aplmitate, the fat found in animal fats and dairy products.

When oleate was pumped through a failing heart, scientists saw an “immediate” improvement in how the heart contracted and pumped blood, Dr Lewandowski explained.

But, when animal fats were pumped through the heart, the heart disease worsened and more toxic fat was produced.

The study is backed by previous research which shows a diet high in olive oil can have the same affect as statins in reducing the risk of a heart attack.